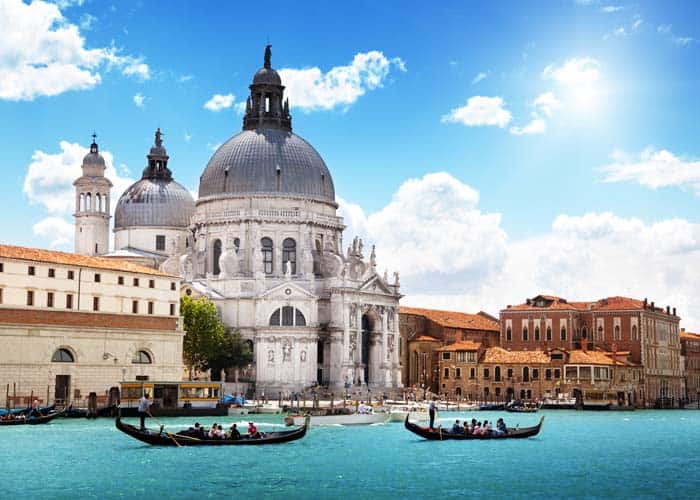 Italy is certainly a “Bel Paese” or “beautiful country” worth visiting at least several times over. It is very likely you are already familiar with this boot-shaped nation bordered by four different seas: The Adriatic, Ionian, Ligurian, and Tyrrhenian. Of course, our picture-perfect view of Italy would not be complete without the islands of Sicily and Sardinia, both of which are just a short distance away from the country’s coast.

Italy’s iconic green, white, and red striped flag is meant to represent the values of hope, faith, and charity to the rest of the world.

Italy is in the Southern part of Europe, only a short flight away from London, England. Because of its proximity to England and other countries such as France, Austria, and Germany, you will find that residents understand many languages like French and German as well as Italian and English. Italy also has a population of over 60 million people, with about 2.8 million living in the largest capital city, Rome.

Many travel guides describe Italy as having a warm, Mediterranean climate, especially if you are staying anywhere near the coast. Once inland, the weather may cool down depending on the time of the year. While not a large country, the large mountain ranges do have an impact on the weather during different seasons. For instance, the northern parts of Italy enjoy snowy peaks during the wintertime. They are perfect for skiing and snowboarding with friends and family!

The many regions of Italy each hold their own distinct cultures, including different customs and prepared dishes. Depending on where you visit, you may find yourself exploring one of Italy’s fine dining areas, art museums, or historical sites. The countryside is perfect for its famous wineries, while the rocky coasts are host to many resort towns, such as Amalfi.

Much of the geography of Italy is mountainous, with many places to stay for tourists hoping for memorable skiing adventures. The two mountain ranges of Italy are the Alps to the north and the Apennines down the entire length of Italy’s “spine”. The tallest mountain is Mont Blanc, located in the northern Alps at 15,780 feet above sea level.

The Colosseum is at the center of Rome, a historic site often visited by tourists. When it was first built in 72 AD, The Colosseum seated more than 50,000 individuals at a time. This location was a host for chariot races and battles between gladiators and beasts.

You can’t mention Italy without an explanation of the infamous Tower of Pisa! Construction of this tower began in the year 1173. It “leans” because it was built on soft ground. Because the city of Pisa sits between two rivers, the ground consists of clay and sand, neither of which offers an ideal foundation. However, the leaning was only noticed when the second floor of the tower was built. Construction was then put to a stop for about 100 years while the soil took time to settle. Building resumed and then halted over a number of years after that until it was finally completed in 1370.

As an industrialized and developed nation, Italy might be a smart investment decision for your enterprise. This is because Italy’s major cities participate in many types of industries, especially automobiles, electronics, machinery, and high fashion. Main exports in agriculture are also popular, with Italian wine and olive oil leading the long list. Tourism, of course, also makes a big economic impact.

Foreign investment in Italian resources is encouraged by the government. The benefits for those who opt to invest in Italy include the same incentives that local residents receive, like tax credits, grants, and specialized loans to get started. Companies in France, Germany, and the United Kingdom often move their services to Italy for the benefits it provides.

Establishing your organization in Italy requires a strong knowledge of the country and the right communications structure. And if you want to participate in the business culture yourself, that depends heavily on personal relationships. For this reason, it is best to begin by making the right connections. Native Italians who have been in business for years traditionally respect the power of authority and seniority, so be sure to pay attention to rank when addressing the right people. Always be sure to call each person by their correct title and last name before using their first name.

Finally, the dress code is a reflection of competence and success in Italy, so when visiting partners, vendors, and future customers, try to present yourself in a professional and formal way. Due to the prominent tradition of Italy’s strong influence in the world of fashion and design, appearance is taken very seriously. Italy is world-renowned for its top fashion brands such as Prada, Armani, Gucci, Missoni, and Dolce and Gabbana. Quite commonly in Italy, even the most casual clothes tend to be on the modern and chic side.

Global Call Forwarding is a provider of Italy virtual phone numbers and Italy toll free numbers with SMS and Email capabilities. Many other features include ringback and call recording to assist you and your business in establishing a solid means of communication. We are committed to helping businesses access Hong Kong through telephony and communication. Businesses communicating with consumers as well as locals are vital for any business.