The Oval Office is the authorized office of the President of the United States. It is situated in the West Wing of the White House Complex. However, another famous guy is sitting right there as we speak. His name is President Donald Trump.

On January 20, he was officially named the 45th President of the United States. In the famous Oval Office, of which he now works, there were a lot of things to be discovered. As perhaps the most famous office in all of the United States, it is both a wonder and a marvel.

However, the main attraction in Trump’s oval office are the phones. However, these are not just your average, landline telephones. Upon his initial days in the office, President Trump found telephone sets for both secure and non-secure calls, which were presented under his precursor Barack Obama. Trump declared them “stunning phones,” yet regardless, some slight changes were made, unmistakably to fit his work style more prominently.

Everybody knows Trump loves to give interviews. It so happened, that he sat down with The New York Times to give them his input on what he calls ‘beautiful phones.’ Trump mentioned “These are the loveliest telephones I’ve ever utilized as a part of my life” – Now, to some people, this might sound somewhat weird, in the back of your mind, you might be thinking a phone is a phone, right? Not exactly when we’re talking about the President’s means of communication.

Well, you might have a point, but let’s face it: we’re talking about the phones of the President of the United States of America and the phones that are being used to handle some of the most important world issues of the moment. Ordinary calls need ordinary communications; leadership on the world level needs phones of that stature as well. The Oval Office phones are for both regular use for administration, as well as for official positions in prominent organizations and businesses. In his Trump Tower headquarters, the President previously used a mid-go Avaya/Lucent 8410 office telephone. This phone is vintage, and it dates way back to the mid-1990s. It even has a secondary monochrome display. Presently, Trump’s Oval Office has two telephones that have sharp, full-color monitors to handle the need for the latest technology possible. 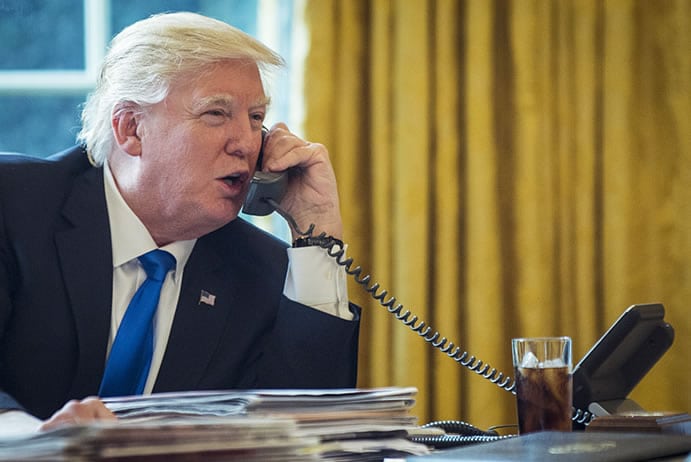 How secure are the oval office phones? About as secure as it can get.

Apparently, for that extra security, President Trump uses Cisco 7975 which is a secure executive Network, and Trump was quick to make this explicitly known as “the world’s most protected system – the words just blow up in the air.” Now, this may seem like a somewhat odd way to express that these calls are extremely encoded, and thus impossible to interject with typical business communication tools.

Security is especially important to the President, and because of this concern, Trump was adamant about ensuring the security of all the phones in the Oval Office upon the start of his presidency.

For instance, rather than using the Cisco 8841 IP telephone altered for security purposes, presently he used the general business adaptation of this phone set. The development module, which typically includes 12 buttons that allow more than 24 added direct lines is no longer in service according to President Trump. Yes, it was more seasoned than the Cisco 7975G IP telephone, but obviously, it was not up to the President’s liking.

With the development module connected, the more traditional Cisco 7975 IP phone was a significant, substantial gadget. So, presumably, Trump did not think it needed any additional immediate lines or buttons. This is more than likely because he can just have a Situation Room correspondences officer interface him when he needs it. However, it might likewise indicate that there are just a few individuals that he is in contact with, trusted with this information.

The explanation behind replacing the altered (and in this manner more protected) Cisco 8841 with a more ordinary version is additionally baffling. It doesn’t make the gadget smaller, nor less demanding to work. The main thing is that the container on the back, the small red catch and the silver anti-tamper seals attract some additional consideration regarding the gadget.

That may not seem like a major ordeal to the average Joe, however, as per a report by The New York Times, guests to the Oval Office mentioned that Trump “is fixated on the stylistic layout” — it is an icon of a triumph that approves him as a genuine individual.”

Trump might be a little paranoid with phones, especially after a leaking incident that occurred after carrying on some professional conversations. Two or three weeks prior to this, Democrats were joining Republicans who censured the leaking of transcripts of Trump phone calls between him and world leaders, creating a chaotic situation.

Could that be the reason for the sudden change of phones? From that point forward, the Cisco softphone from the 8800-arrangement with the security adjustments was placed back on Trump’s work area once again. According to some sources, Trump “had the phones altered since he doesn’t trust whatever was left around by the Obama administration.”

Now, when it comes to oval office phones, Trump is inclined towards a conventional Cisco 8841 IP telephone for his work area, rather than the adjusted form that secures against refined listening eavesdropping methods.

In today’s day and age of hyper-communication, information leaks, and a general lack of privacy due to the efficiency of recording all information, having the most secure phone systems is of utmost importance. It’s not just a Presidential issue; it’s an issue of national and global security.