Battlestar Galactica began as a short lived television series that went on to spawn several sequel series, movies, books, comic books and even a board game. Rabid fans across the world have kept this franchise afloat since 1978. However, many fans may have been confused by the unique tech that was aboard the famous ship. One of the most interesting things about the spaceship that the colonial survivors used to flee from their enemies, The Cylons, was that despite the ship’s impressive station, a lot of the technology seemed to look somewhat outdated. The reason for their ancient tech features was explained in the mini series. That reason was to use old fashioned computers and gadgets as it would be harder for their enemies to get an advantage over them. 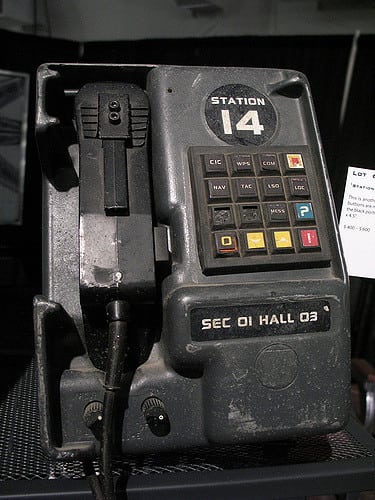 Previously, all of the new warships’ networks were poisoned by the Cylons, fortunately The Battlestar Galactica remained of the old warships. It was going to be turned into a museum ship, but once the new warships became decommissioned those plans were put on hold. The colonials no longer wanted to take the chance of being “hacked” again so they stood by their old science, and it has kept them safe for over 30 years.

Humans reach new heights by populating 12 planets, in addition to their home planet of Kobol.

They have created an army of robots to do their bidding, called the Cylons, however the Cylons eventually rebel. After a 1,000 year long war between the humans and the Cylons, they decide to sign a peace treaty. This turns out to be a ruse on the part of the Cylons, and once the humans defenses are down, they go on to destroy everyone they can find on the 12 colonies.

Luckily, Commander Adama had his suspicions about the Cylon’s and sent out several spy ships. These ships find that they were deceived and are soon attacked. The Battlestar Galactica calls all remaining survivors aboard these ships to enter so they may flee.

Without anywhere to go, the survivors head towards a mythical planet called Earth that was supposedly home to a human group.

The continuing series takes place 50 years into the future. The Cylons had left the humans alone for a time, but return with a team of Cylons that look exactly like humans. The Cylons have convinced themselves that they are a superior race, but they cannot breed as easily as humans do. This leads to a belief that breeding would only work with a human, so they decide to let the few remaining humans survive. The Cylons also believe that if they return to Earth with the humans that they will meet their one true God, whom differs from the humans’ Gods. They believe that once they have spoken with their God they will be able to gain all of the abilities they seek.

The Battlestar Galactica ship is one of the last remaining warships from the early wars. It is preferable to use this older model of ship because the Cylons are so advanced that fighting them with antiquated equipment is actually preferable. This old tech is not a normal canon for typical sci-fi series’. A typical series talks highly of their tech and it is deeply entrenched in how the series moves forward and defends themselves from their enemies. In the Battlestar Galactica series, the old gadgets seem as though they are simply background in a series that is mainly focused on the drama between the characters.

This creates confusion in longtime sci-fi fans. They often seek to find out more information on this series’ strange presentation of technology, such as the ability to disconnect an entire ship network by simply pulling cables out of a wall or using X-ray machines to detect enemy weapons. The Combat Information Center is the base of operations aboard the ship and contains very important, yet simple, 3 ring binders filled with tactical and ship maintenance information as well as the TA-1/PT Telephone Sets.

An important plot device from the ongoing series is their unique, yet very dependable phone. It has been used to make -and take, many important phone calls by Commander Adama throughout the series. A majority of the phones we see on the television series are resin copies of an original military model phone that was created in an electrical company in Neptune, New Jersey. The benefits of using this phone are great. Not only does this sound powered telephone allow for communication without the use of batteries it can also send and receive signals that are either visual or audible. According to https://www.galactiguise.com, the phone set “can be used to advantage in forward tactical areas, in switched networks having magneto signaling switchboards, in closed nets, and in point-to-point circuits.“

Operating this telephone set is quite manageable. The user is able to handle this device by operating a lever to turn it off and on. There is a simple button that allows the user to choose to talk. It could be argued that having such an uncomplicated way to communicate is the most convenient practice for a motley mix of humans to use since they are constantly at war with a highly advanced group of robots.

The telephone is set up as a black box with the corded phone set to one side and 16 buttons on the other. These buttons are not numbered, instead they are made to directly call to different parts of the ship. This is noted by the three letter words emblazoned on the buttons such as HAV, CIC and TAC. Two of the buttons seem to have been burned off, a perfect warning symbol not to press those anymore.

Fans of the show may have wondered why the phone was not cordless as most normal phones are today. But as explained earlier, The Battlestar Galactica is unique in that it is an old fashioned sort of technology that is being used. The user HNL from scif.istackechange.com sums up the reasoning behind the choices of defense upon the Battlestar Galactica perfectly with this quote, “The simpler the technology, the longer (it) endures!