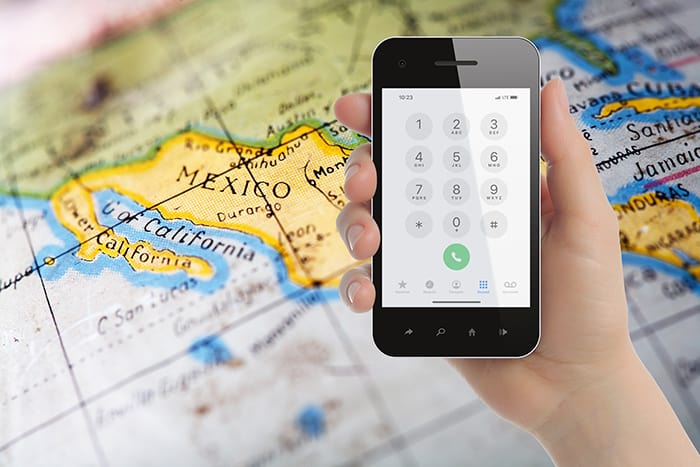 Mexico supports many thriving sectors, including the oil industry, tourism, agriculture, and the production of consumer goods. Employees in Mexico look forward to working with American businesses, and often head to America for employment as well. Reports show that Mexico further benefits from America’s success. By the year 2004, immigrants in the US had already sent more than 16 billion dollars (USD) home to Mexico.

Speaking to consumers is more important than ever. The worldwide use of mobile phones makes having a business line a necessity. 80% of people who use the internet also use smartphones. This means that your ability to be reached by phone is equally as important as your online presence.

Today, with so much automation, you can stand out by speaking with customers and establishing loyalty using Mexican local phone numbers. Small businesses may overlook the importance of interacting personally with customers, but entrepreneurs must consider that the average amount of time a person spends speaking with a business representative has increased by 113% from 2016 until 2017.

Business owners often cite the advantages of cheaper labor costs in Mexico. Competing countries continue to attempt to rival Mexico’s affordable costs of labor, but with its stable economy, Mexico remains at the head of the pack. Mexico offers a number of advantages through lower costs and worldwide collaboration. Foreign businesses can be properly positioned to work with Mexico and North America by having Mexican local phone numbers.

Trade is undoubtedly profitable in Mexico because of its partnerships and location. Mexico and America are neighboring countries known to collaborate and adopt similar business values. America also sits next to Canada, furthering your potential customer base from Mexico.

Mexico and Canada have a GDP exceeding a trillion dollars (USD). Considering that the US is a country based on consumerism with a GDP of 18.6 trillion dollars, the possibilities are particularly promising because of the relationships between these three countries.

Many of the parts that are used for American vehicles and popular technology products are exported from Mexico. More than 200 billion (USD) comes from exporting from Mexico each year. 80% of these goods are sent to the United States, but Canada benefits as well. While only 5% of exports go to Canada, this 5% contributes 22 billion dollars to Canada’s economy.

Many Mexican workers strive to be successful in agriculture and manufacturing. If you choose to manufacture in Mexico, you’ll reap the benefits of a productive and dedicated workforce known to produce a higher volume of goods in shorter amounts of time. Mexican local phone numbers will allow you to request frequent status updates regarding production. Furthermore, allow your team members in Mexico to call you locally with no additional fees or confusion from using different country codes.

The convenience of Mexican virtual numbers and proper business etiquette is the best way to attract new clientele. It’s important to show potential customers they are more than welcome to call your company. Every new caller is a potential customer, but not a guaranteed buyer. To create profitable relationships, add a voice menu to quickly connect customers to knowledgeable staff.

If you’ll be taking the calls directly, always give a professional hello and offer your help after taking the time to understand the caller’s questions and concerns. A little kindness goes a long way in the world of business. When someone calls your Mexican local phone numbers, always thank them for deciding to contact you and ask if there is any way to further assist them.

The way you conduct business over the phone in Mexico can greatly impact your ability to network and succeed in the country. Your Mexican local phone numbers will allow you to set meetings over the phone or in person. Mexican culture is strong in ethics and principles. Therefore, what you say is considered equally as valuable as written terms and agreements. Strengthen your business to business interactions with Mexican local phone numbers.

Mexican local phone numbers give you access to a country committed to hard work that meets the standards or foreign businesses while respecting legal treaties. Outside of Mexico, your business can further benefit from free trade agreements that extend from North America to Japan and many other countries as well. Free trade agreements also partner Mexico with the nations of Canada, Germany, and countries throughout Central America.

Research has shown that 72% of consumers were able to remember a vanity number after a 30 second advert, while only 5% could remember a general phone number. Keep your Mexican local phone numbers on the minds of your target customers with a vanity number that’s unique and easy to remember. Also, remember to diversify your team with a staff that is fluent in both English and Spanish to show your respect and appreciation for Mexican consumers.