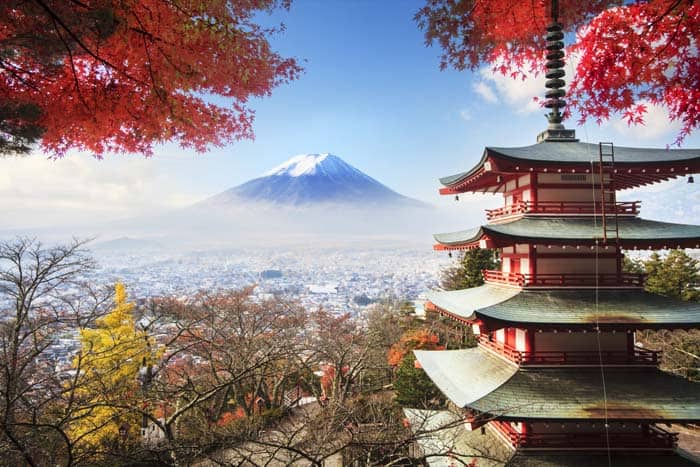 Japan is a fascinating island country of about 127 million people. Surrounded by the Sea of Japan and the Pacific ocean, it consists of over 6,800 islands. The nation is well known for immense high rise urban cities as well as national parks for residents and tourists to enjoy. It is affectionately known as “The Land of the Rising Sun,” and its traditional name is Nippon.

Japan is probably best known for its modern capital Tokyo. It is also the nation’s largest metropolitan area with 35 million people. Their metro system and trains are the world’s most efficient and timely way to travel, with the average delay being only 18 seconds long.

The city of Kyoto is much more nature-inspired, abundant with featured gardens and cherry blossoms. Cherry blossoms are a national symbol. Kyoto is a well known historic site and it is the former capital of the country. Here you will discover monuments, temples, shrines, and places of interest to visit that aren’t too far from the international airport.

The country of Japan is truly unique. Most of the country is made up of mountains and volcanoes. For instance Mount Takao is a well visited mountain with trails for climbers and hikers alike. Once you reach the summit you’re able to see all of it’s natural beauty for thousands of miles! Japan is also home to more than 200 volcanoes, 110 of which are active! Perhaps the most famous of all is Mount Fuji, which is an iconic symbol of Japan. Mt. Fuji is the tallest mountain in Japan, and it also happens to be an active volcano.

The people of modern Japan are not particularly religious, however reverence is given to the cultural significance of Buddhism and Shintoism.

Japan features one of the most robust economies in the world. The Japanese market is highly developed and overall, quite market-oriented. Currently, Japan holds the 2nd largest GDP worldwide, after the US. It ranks as 3rd largest in terms of nominal GDP, and 4th by purchasing power parity (PPP).

Japan plays a large role in the world’s economy. While Japan’s stock market crashed in the year 1990, the government has been working diligently to make repairs. By 2007, Japan was starting to see improvements. While the global financial crisis of 2008 caused another downturn, electronics and auto sales are largely responsible for their revival in recent years.

International markets are impressed by the very proactive policies working to solve past issues.

Japan’s return to economic growth has been a positive one. Tourism has played a large factor since Japan is the 5th most visited country in the Pacific. The government is also optimistic about attracting more tourists for the 2020 Olympics, which will be hosted in the capital of Tokyo.

If you are a business owner looking for new opportunities in the country of Japan, or the popular cities of Tokyo, Kyoto, Osaka, Nara, or Hakone, now is the best time to do so. Japan continues to experience growth, and setting up a business there, or expanding your current business virtually may prove to be advantageous.

It’s very safe to say that Japan is a top exporting giant and for this reason, unemployment remains low. You may recognize Japan by their famous brands like Toyota or Honda. As an industrialized nation, they produce some of the top motor vehicles, many of which are shipped to the United States and other countries. More than that, Japan owns Sony and Nintendo, which are some of the most popular electronic gaming companies.

Because of Japan’s large population and intuitive knack for technology, their telecommunications sector is likely one of the most advanced in the world. This is mainly due to their frequent adoption of new technologies and the fact that many of their electronics are produced in-country.

The majority of broadcasting done in Japan is through the Japan Broadcasting Corporation, or Nippon Hoso Kyokai, or NHK, since the year 1925. When television broadcasting started in the 1950’s, NHK provided independent programming for viewers. By 1987, more than 99% of Japan had color TV sets and were watching shows regularly, and now there are more than 12,000 television stations operating there. Innovation in Japan continued to grow so that new carriers were making advancements in communications.

Phone providers include NTT DoCoMo, KDDI, SoftBank Mobile, and Y!Mobile. The mobile market is competitive and regulated by the Ministry of Internal Affairs and Communications. Now in a culture of mobile technology, residents in Japan enjoy features like email, live video feeds and calling, music streaming, touchpad systems, and even fingerprint recognition on their devices. It’s quite impressive to see such massive technological growth in such a short amount of time.

Global Call Forwarding is a provider of Japan virtual phone numbers and Japan toll free numbers voice capabilities. Many other features include ringback and call recording to assist you and your business in establishing a solid means of communication. We are committed to helping businesses access Japan through telephony and communication. Businesses communicating with consumers as well as locals are vital for any business.