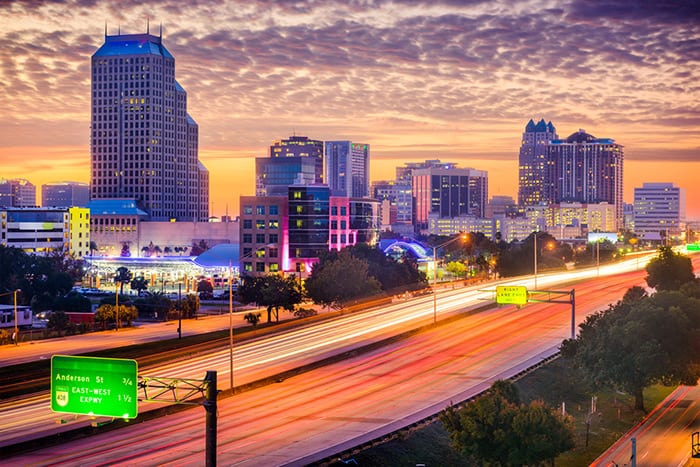 The 407 area code – Orlando, Florida serves all of Orange, Osceola, and Seminole counties, as well as some portions of Volusia County and Lake County. It was created in 1988 as a division separation from area code 305. Originally, it included most of Central Florida, the Treasure Coast, and the Palm Beaches. In 1996, Palm Beach, Martin, Indian River, and St. Lucie counties were separated from the 407 area code to form the 561 area code. Since that time, the 561 area code has also split and the 772 area code was formed. In October of 2000, Brevard County was also separated off and the area code 321 was formed. More transitions have occurred since then, based on growth, but the 407 area code – Orlando, Florida remains widely recognized, because of the wide area it originally covered and due to the many tourist attractions and businesses that call that area home.

The 407 area code – Orlando, Florida area is home to some of the most widely known tourist attractions in the United States, including Disney World, Universal Studios, Sea World, Wonder Works, and Ripley’s Believe it or Not. Other attractions include Andretti Indoor Karting and Games, I-Drive NASCAR, Topgolf Orlando, Pirate’s Cove Adventure Golf, and iFly Orlando Indoor Skydiving. For outdoor adventure that doesn’t consist of theme parks, there is Wild Florida, Spirit of the Swamp Airboat Rides, Boggy Creek Airboat Rides, Orlando Tree Trek Adventure Park, Revolution Off Road, and Forever Florida Ziplines and Adventures in the Wild.

The area represented by the 407 area code – Orlando, Florida is also home to many water parks, a wide variety of dining experiences, hotels that serve as destinations on their own, and so much more.

In addition to being well-known for many tourist attractions, the 407 area code – Orlando, Florida is also known to be a hub for business. There are many businesses that are headquartered in the area and, therefore, there are many job opportunities for those who live in the area or wish to relocate to the area. Just a few of the companies that are headquartered in the 407 area code – Orlando, Florida area are:

Though the 407 area code – Orlando, Florida is beautiful and features many wonderful parks, nightlife, shopping, and entertainment choices for residents and visitors, those who venture just outside Orlando into some of the nearby towns, will find that some of those towns have developed little niches of their own.

Surrounding Towns in the 407 Area Code

Winter Park, Florida, for example, is home to a number of annual festivals and events and the area features over 70 parks, golf courses, and well-known shopping and dining areas. Those who reside in Winter Park, as well as those who visit, can enjoy a downtown lifestyle without being in a large metropolitan city. Luxurious downtown condominium communities offer the features of the downtown lifestyle without much of the noise of the larger cities.

Other nearby towns with their own special offerings include Sanford, Winter Garden, Clermont, Lake Mary, and Windermere, to name a few. All of these areas have vibrant city living in a more intimate, smaller city or town.

A Business and Technology Hub

The downtown portion of the 407 area code – Orlando, Florida has also evolved into a hub for technology and startups. Through excellent and steadfast collaboration between local government and entrepreneurs, the area supports technology, innovation, and entrepreneurship and this is just one of the reasons that startups are increasingly attracted to the area.

Orlando Mayor Buddy Dyer recognizes the importance in accelerating Orlando’s reputation as an epicenter for technology. Dyer also recognizes the importance in simultaneously advancing opportunities for entrepreneurs. A focus on developing coworking spaces is one example of this. Coworking spaces offer a space and resources for startups and small businesses that is needed in order for them to grow. A number of funding opportunities and incentives offered by the City of Orlando in order to help businesses grow are other examples.

The 407 area code – Orlando, Florida has shown consistent growth over the years. This is illustrated in a great number of ways through the area’s economy, government, businesses, attractions, residential housing development, commercial real estate development, and much more.

The 276 area code serves major parts of Orlando in Florida such as Orange, Osceola, and Seminole counties, and some portions of Volusia County and Lake County.

The 407 area code follows Eastern standard time (EST) like the rest of Florida. EST is five hours behind GMT.

Global Call Forwarding can help you get an Orlando 407 area code number. Browse through our inventory and sign up for your new number.