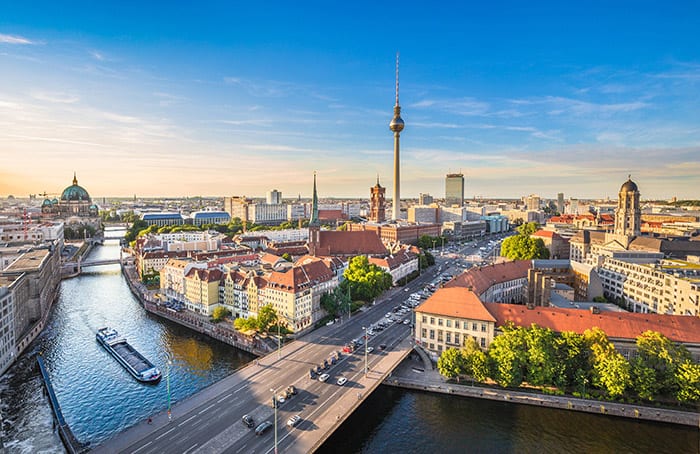 About 83 million people live in Deutschland, which is the local term for the country of Germany. Germany is bordered by a number of countries that include the Netherlands, Belgium, Denmark, the Czech Republic, and more. Because of Germany’s proximity to these countries, the local residents often grow up speaking more than one language. English is also very common and taught in schools to children from a young age.

The German landscape consists of tall mountains and rolling plains in the northern and southern regions. There are also forested hills in the east and west. Because of this country’s long history and geographical diversity, you will see picturesque churches and medieval castles alike.

All of this and more contribute to Germany’s tourist economy that attracts millions of visitors every year.

Germany is famous for their prowess in engineering and innovation, which has brought the modern world automobile brands such as BMW, Audi, and Volkswagen. Germany has also made great contributions to the world of music composition. Legendary composers like Johann Bach and Ludwig van Beethoven were born in the cities of Eisenach and Bonn.

With more than 3 million residents, the capital of Berlin is the largest city, followed by others like Hamburg, Munich, Cologne, and Frankfurt. Germans are by culture heavily invested in the arts, with many museums and theatres to attend. The Bayreuth Opera House in Bavaria was built just for operas created by the artist Richard Wagner. It was built in 1872 and has unique acoustics that make for appealing concerts.

Today, Germans are fond of sports, with football (called “soccer” in the United States) being their most popular. Their teams are both highly competitive and beloved by millions. Their passion for football extends into coaching the younger generation so they can establish themselves as professionals at an early age. On the global stage, Germany has won four World Cups: 1954, 1974, 1990, and 2014.

Germany is known for beautiful historic architecture. More than that, Germany’s main attractions and landmarks continue to make any vacation stay a memorable one, year after year. For example, there are more than 20,000 castles and castle remains in this country, there are a few that stand out from the rest. The stunning Neuschwanstein Castle in Bavaria was commissioned and built in the 19th century. Walt Disney himself viewed this castle and used it as an inspiration for today’s Cinderella’s Castle at Walt Disney World in the United States.
As the tallest peak in Germany, Mount Zugspitze is close to the Austrian border, so you have the ability to see into other countries from one platform. This mountain is a great spot for snowboarding and skiing in the winter during the colder months and hiking in the warmer months. Residents can access Mount Zugspitze by cable cars for a panoramic view. It is perfect for photographers who want the perfect shot!

Hildesheim St. Mary Cathedral is a church built around the year 1010. While the current building was rebuilt in 1950, it is a valuable replica that educates tourists on German architecture from that time period.

For those who want to see more natural landmarks, Germany is home to many such as Röthbachfall, which is the tallest waterfall in the country. Aachtopf is a powerful spring which produces 8,500 liters of water per second. Messel Pit is an abandoned quarry rich with well-preserved fossils of plants and animals, many of which have been studied at length.

Germany has a rich tradition of hearty food and cold homemade brews. While there are different versions of what constitutes a “traditional” meal, most would agree that Germans are fond of pork and Bratwurst, which is a form of sausage. Potatoes, sauerkraut, cabbage, and beets are also usually integrated into German meals.

Barley, hops, yeast, and water is the combination used for Germany’s most popular drink, beer. In fact, this country is the birthplace of the Pilsner style of beer. This drink is so integral to the German culture that there is an entire festival centered around it. Many people flock to Germany for Oktoberfest, which is an annual tradition that is sometimes celebrated in other parts of the world, too. Oktoberfest is a beer festival held in Munich that lasts for a period of two weeks. People consume all different styles of beer with baked bread, sausage, chicken, spit-roasted duck, and other famous German foods. It is a celebration that features music and dancing while locals wear traditional German clothing.

Oktoberfest beer is stronger than other styles and is allowed to age for a certain amount of time before the festivities officially begin. German pretzels are freshly baked in local bakery shops and are often exported to other parts of the world. And for dessert, the signature Black Forest Cake is made with real dark chocolate, cream and cherries.

Global Call Forwarding is a provider of Germany virtual phone numbers and Germany toll free numbers with SMS and Email capabilities. Many other features include ringback and call recording to assist you and your business in establishing a solid means of communication. We are committed to helping businesses access Germany through telephony and communication. Businesses communicating with consumers as well as locals are vital for any business.