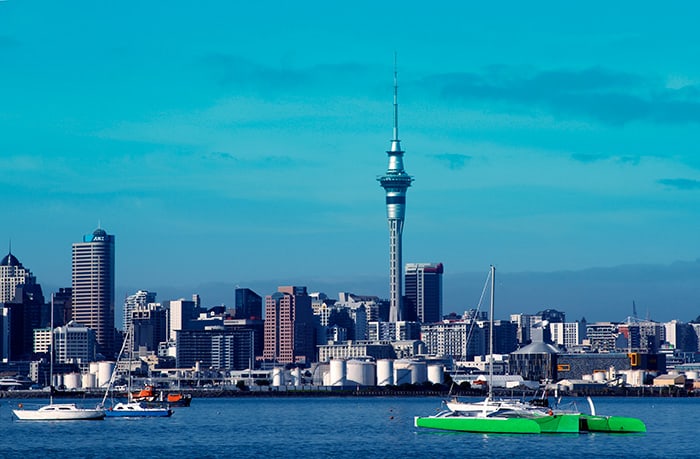 Want to know more about a country with a wide variety of scenic views, mountain biking, hiking, fishing, and more? New Zealand is a playground for individuals who seek thrills in outdoor adventures. Just slightly larger than the United Kingdom, New Zealand is a top travel destination for many throughout the year.

It might surprise you to learn that New Zealand’s residents are called Kiwis. Their dollar coin actually features a kiwi bird on the side!

4.5 million people inhabit New Zealand, one-third of which live in the modern area of Auckland. Wellington is the southernmost national capital. Along with the sports listed above, residents also enjoy rugby, sailing, white water rafting, and skiing. One of the reasons for this love of the outdoors is the beautiful weather. There’s a great range of weather that can be experienced in a single day, and the northern part of the country experiences the majority of the warmer temperatures.

Tourists enjoy the cultural tours, historical sites, and many museums, exhibiting different points of interest and landmarks for all to see. These are often perfectly family-friendly activities that everyone can enjoy.

New Zealand’s economy includes exporting wood and paper products, wool, and textiles. Their food industry favors meat and fish products as well as wines from the nation’s many wineries. Trade and exports together equal about 55% of New Zealand’s Gross Domestic Product (GDP). Trading occurs mainly with the United States, Australia, and Asian countries such as China and Japan. New Zealand is a developed country, and has received high ranks in regards to education, economic freedom, and the overall quality of life.

Over the past 50 years or so, New Zealand has transformed into a more industrialized and free market economy. While the country suffered from a recession from 2008 to 2009, it has bounced back and achieved actual growth from 2011 to 2016. This is due to the government’s involvement in export markets, investments in innovative sectors, and solving previous issues in infrastructure. They also keep a close eye on spending to reduce their overall debt.

New Zealand has a nominal gross domestic product (GDP) per capita that stands at $36,254 (US), which warrants it as a high-income economy.

New Zealand’s farming economy involves sheep and milk production as well as butter and cheese. Farms help support finance and trade, which is a deeply significant part of their economy.

Today the World Bank has stated that New Zealand is the most friendly country in the world in terms of opening a new business. Tourism especially has become a great generator of funds, bringing in a great amount of money that benefits the nation as a whole. $12.9 billion, or 5.6% of the economy was generated as a result of tourism in 2016, which supported 7.5% of the overall workforce of New Zealand. Furthermore, in terms of considering the future prospects for New Zealand, tourism is highly promising, with projected growth anticipated at 5.4% annually through 2022.

The leading phone companies are Vodafone, 2 Degrees, and Telecom Mobile, while many others offer mobile phones and networks together. International plans vary, some charging per minute, some offering a data allowance, and some offering free mobile phones with their plans while others charge for it. Tourists usually have to plan ahead for calling services when they travel for longer lengths of time abroad. This is why short-term cell phone plans tend to be popular there.

New Zealand’s main country code is 64, so if you’re planning on calling a business abroad, the formula is: “00 + 64 + the city area code + the local number.” City area codes are uniquely only one digit long. So Auckland, for instance, is “9,” Christchurch is “3,” and Wellington is “4.” More than that, dialing a “01” will get you the national and international operator and directory service.

At Global Call Forwarding we want your business to stay connected with New Zealand along with its consumers. This prosperous nation offers many opportunities for businesses looking to expand, and due to its stable economy, the prospects are good. We offer New Zealand virtual phone numbers for local and toll free numbers, so setting up a virtual local presence in New Zealand can be quite simple, and an overall streamlined process. Best of all, these numbers are digital, so they can be forwarded or redirected to any of your chosen locations.

It’s time to expand your business into a country that’s thriving in economic growth and resources. Whether you choose to set up a new call center or want to communicate with new vendors, Global Call Forwarding allows you to choose new numbers to save time, money, and resources.