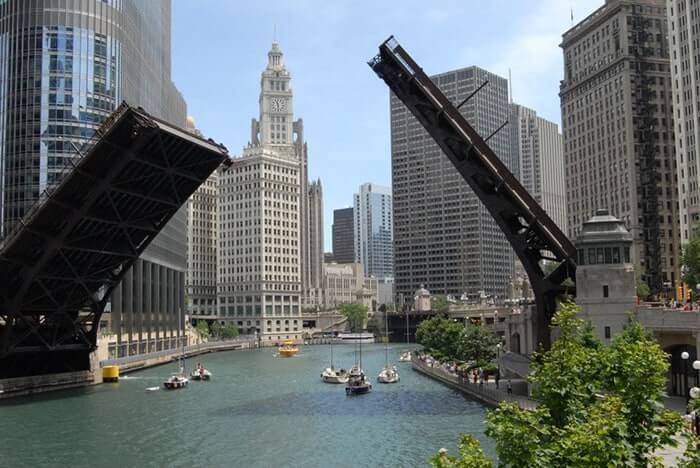 The city of Chicago is located in northeastern Illinois. It is a multicultural city that buzzes with diversity throughout its 77 distinct neighborhoods. Today’s Chicago embodies the American values of hard work, integrity, and community. It is also recognized throughout the U.S. as a region that is passionate about its sports. Chicago is home to Wrigley Field – home of the Cubs baseball team, Soldier Field – home of the Bears football team, and United Center – home of the Bulls Basketball team, and is also renowned for being a pioneer in public school reform, public safety enhancement, affordable housing, public accessibility, and environmental sustainability.

The first inhabitant of Chicago arrived in 1770. His name was Jean Baptiste Point du Sable and he was a Haitian man who had recently been freed. Five years later, the U.S. government built Fort Dearborn. The fort was razed to the ground by Native Americans in 1812. It was rebuilt but then demolished later in 1857.

Chicago was incorporated as a city in 1837. Because of its location, it soon became a significant trading town during the time of the nation’s westward expansion. In 1848, construction of the Illinois and Michigan Canal was completed, creating a waterway linking the Great Lakes and the Mississippi River. However, before too long, the canal became outmoded due to the construction of the railroads. Today, around 50% of U.S. rail freight passes through Chicago, despite the city being the busiest aviation hub thanks to Midway and O’Hare international airports.

In the 19th century, most of it’s buildings and sidewalks were made of wood. Unfortunately, most of them burned to the ground in the great fire of 1871. The fire began at the O’Leary family property and soon devoured most of the city. Today, the Chicago Fire Department’s training academy is situated at 558 W. DeKoven Street, which is the original location of the O’Leary family property.

Chicago’s determined inhabitants quickly rebuilt the city. Most of the debris left from the fire was put into Lake Michigan to form the foundations of what is now Millennial Park and Grant Park. Just 22 years after the fire, Chicago celebrated its renewal by hosting the World’s Columbian Exposition of 1893.

In the fifty years following the Great Fire, Chicago welcomed many immigrants who came to take employment in the meatpacking plants and factories. Many of the workers found homes in social settlement houses operated by Jane Addams.

Today, Chicago’s economy is booming. The Windy City is home to 29 Fortune 500 companies and is a major center for distribution and transportation. Some of Chicago’s major industries include publishing, printing, manufacturing, food processing, and insurance. Chicago has the world’s 21st largest economy.

With more than 70 districts, Chicago’s real estate market is one of America’s most competitive. However, it has seen a steady decline in sales in the past few months, though the real estate market is fundamentally strong. Average home prices are currently below their all-time highs. Each Chicago neighborhood offers something a little different, and each has its own pros and cons. Each also has its own level of competition.

The city’s most expensive neighborhoods include Near North Side, Lincoln Park, and Lake View.

If you’re one of the 52 million people who visit Chicago annually, you will not be short of landmarks and attractions to see. You can catch a bird’s eye view of the city from the 15-story Ferris wheel located on Navy Pier. The wheel is modeled after the original one, which made its debut in Chicago at the World’s Columbian Exposition of 1893. You can take the family to visit all the animals at Lincoln Park Zoo for free, or marvel at Willis Tower (formerly the Sears Tower), which at 110 stories high, is the tallest building in the Western hemisphere. Willis Tower also boasts the world’s fastest elevators, which travel at a speed of 1,600 feet per minute. Another must-see is the Chicago Cultural Center, which houses the world’s largest stained glass Tiffany dome.