In 1879, people began using the first telephone numbers in Lowell, Massachusetts. From the 1920s until the 1960s in North America, phone numbers were a combination of letters and numbers, and the first three characters of the phone number related to the geographical location of the exchange. US movies, television, or books used KLondike 5 (after the 1960s, 555) and QUincy 5 (because there is no “Q” on the telephone dial) for fictitious phone numbers. Since the 1960’s, US phone numbers consist of ten digits, three for area code, three for exchange, and four for the specific number.

The following graphic is an area code map for the US. 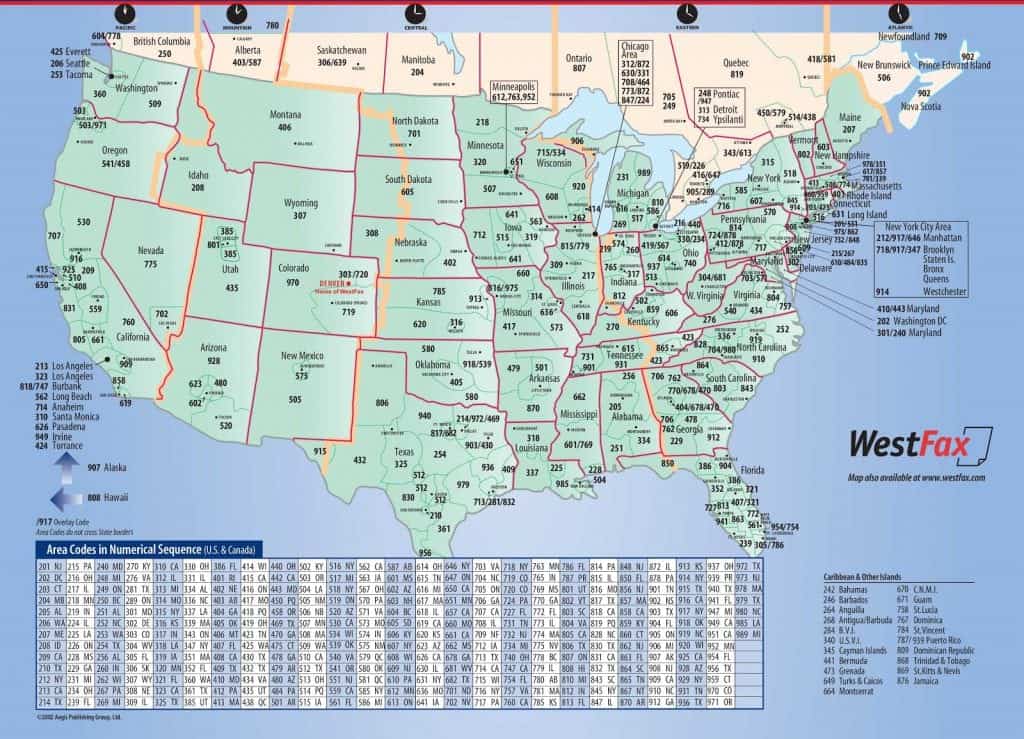 Before making an international telephone call, one must enter a country code. The website CountryCode.org is an interactive site that gives country codes for all countries. The home page has a selection box for the desired country name. Entering the country name automatically links to the country’s page. For example, when entering Argentina, the website displays the Argentina page, which displays a wealth of information:

An exit code for the calling country, 011 when calling from the US

After filling out a selection box with the calling and destination countries, the site displays dialing instructions. For example, when entering the phone number for a call from France to Argentina, enter the exit code (00), the country code (54), the city code, and the number.

The website, HowtoCallAbroad.com, is an international calling guide. This guide has a table of country codes, exit codes, and trunk codes that precede the phone number when dialing a call. Trunk codes are single or double-digit codes that people dial when calling long distance within a country. For example, on US landlines, one must dial “1” before the area code and phone number.

The format and length of phone numbers is determined by each country. The Wikipedia website entitled, National Conventions for Writing Telephone Numbers gives a sampling of phone numbers around the world.

The International Telecommunications Union Sector ITU-T has issued a standard, E.123, to recommend formats for phone numbers, email addresses, and web addresses. The international format for telephone numbers uses spaces to separate groups of numbers. However, national conventions may require the use of hyphens.

There are also special codes, two examples of which are *66 and 1166 to keep retrying a busy line and *70 or 1170 to cancel call waiting on a call-by-call basis.

There are three types of toll free, call forwarding phone numbers: 800 numbers, vanity numbers, and virtual local numbers that Global Call Forwarding (GCF) sells to its subscribers. Here are the steps for how call forwarding works:

While these numbers are free to callers, GCF charges the subscriber for the service.

There are six different area codes for 800 numbers: 800, 888, 877, 866, 855, and 844. Vanity numbers have an easily remembered sequence of characters such as 1-800-TAXICAB or 1-800-GET HELP. GCF sells local phone numbers throughout the world. Subscribers select their preferred location for the number. It gives them a virtual office in that locality.

Business phone numbers are telephone numbers used by companies and enterprises for business communication purposes and to enable incoming and outgoing calls. Customers can use these numbers to call a business for sales or customer service request.

Having a business number gives customers and interested prospects a way to connect with your business for product inquiries or customer support. The number becomes a part of your business’s identity.

You can get a business phone number that is ideal for your company by signing up on Global Call Forwarding’s website. Choose your number from our large inventory of toll free, local, international, and vanity numbers.