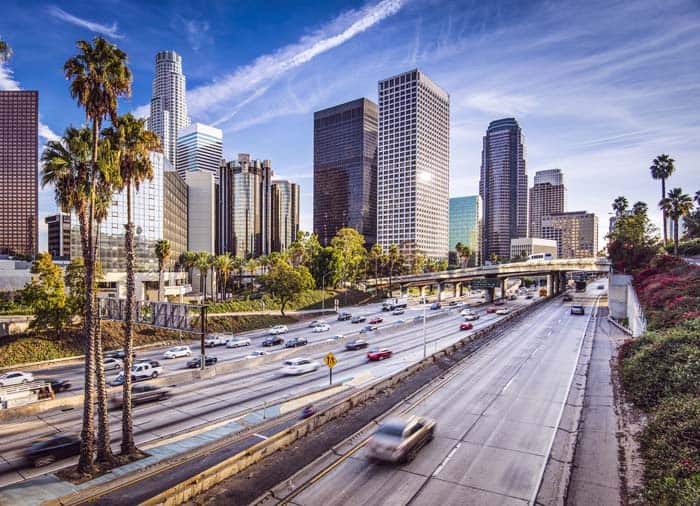 Los Angeles, also called the city of “the Angels,” boasts many great distinctions since its founding in 1781. This California treasure attracts individuals from all over the world, representing more than 140 countries, speaking over 200 different languages. Much of the population is Hispanic, Latino, Asian, Pacific Islander, or African American.

The geographic area is just as diverse as its population. While Los Angeles is mainly a desert basin, it is also surrounded and divided by mountain ranges. This allows the city to have a low altitude of just 9 feet below sea level and a high altitude of 233 feet. As if deserts and mountains were not enough, Los Angeles residents also enjoy the area’s impressive rivers, including the San Gabriel, Santa Clara, Rio Hondo, and more. The Rio Hondo is about 16 miles long and passes through several cities.

75 miles of coastline line Los Angeles to the west, and it is home to some of the best and most well-known beaches in the world. Long Beach and Malibu Beach have some great spots for surfing, while others participate in oceanfront dining and unique shopping opportunities. There are many family friendly activities offered on the water, and many people visit just for the chance to simply soak in the sun on the golden shores. Take a boat tour or cruise for a chance to view some of the awesome marine life. Catch a glimpse of the whales with a whale watching tour in Marina Del Rey, or try sportfishing in Newport Beach. No matter what your interests are, there is always a worthwhile activity nearby.

You are probably most familiar with Los Angeles’ famous “Hollywood” sign in bold white letters in the Hollywood Hills. Originally, when it was first put into place, it read “Hollywoodland.” This sign is iconic, bringing to mind some of California’s most beloved films of all time. Have you ever seen the movies “Boogie Nights” or “The Big Lebowski?” These films are set in Los Angeles. The film industry began in Los Angeles during the years of Thomas Edison. He lived in New Jersey and held many of America’s patents for film. Because of this, movie makers went West to avoid paying the extra fees.

In Los Angeles, you can also find the Hollywood Walk of Fame, which features over 2,500 stars embedded right into the sidewalks on the streets. Each star states the name of either an actor, director, producer, musician, or music group. Tourists can search for the names of the famous individuals they love. Hollywood has always been a place celebrities are commonly found, and people visit just for the chance to see and take photos with their favorite star.

Those who want to get away from the “feature film” lifestyle can explore the many outdoor activities found in Southern California. Because of the perfect weather and sunshine, residents of Los Angeles can choose between hiking trails and bikeways, each with spectacular views. There are so many options for attractions that it’s very difficult to “do it all” in just one trip.

Since the entertainment industry is so vital to the economy of Los Angeles, there are other fields that also benefit. For instance, since so many film stars live in the area, there is a big market for luxury real estate, high fashion, tourism, and the arts. You can also get immersed in the culture of Los Angeles by visiting the many theaters and operas. The hospitality and leisure sector is also leading the game with more than 500,000 residents employed. More jobs are added every year in this industry because it is crucial to the tourism and entertainment industries. More than that, Los Angeles is a host to manufacturing and healthcare jobs.

If Los Angeles were its own country, it would surprisingly be the 20th largest economy in the world. The Port of Los Angeles handles all imports and exports for the city. Commodities include technology manufacturing, like computers, appliances, and television equipment. Natural gas and refined oil is also at the top of the list.

Big enterprises pop up all the time in the big city, and professional companies use modern meeting spaces and convention centers to conduct business and continue growth. Downtown Los Angeles has many hotel meetings areas fit with the latest technologies, making it an ideal location for companies needing a centralized location for large-scale meetings or conferences.

Finally, Los Angeles is well known for having a culture of startup companies. Each enterprise hopes to become a nationwide sensation one day. While some struggle to stand out among the competition, there are many incentives and options to expand in the state of California. Sometimes this means outsourcing certain tasks overseas or setting up virtual offices to save money on overhead. Either way, there’s a high chance of success there. You may recognize some of Los Angeles’ other famous companies like The Walt Disney Company, Guess, and American Apparel.

Global Call Forwarding is a provider of Los Angeles virtual phone numbers and Los Angeles toll free numbers with SMS and Email capabilities. Many other features include ringback and call recording to assist you and your business in establishing a solid means of communication.