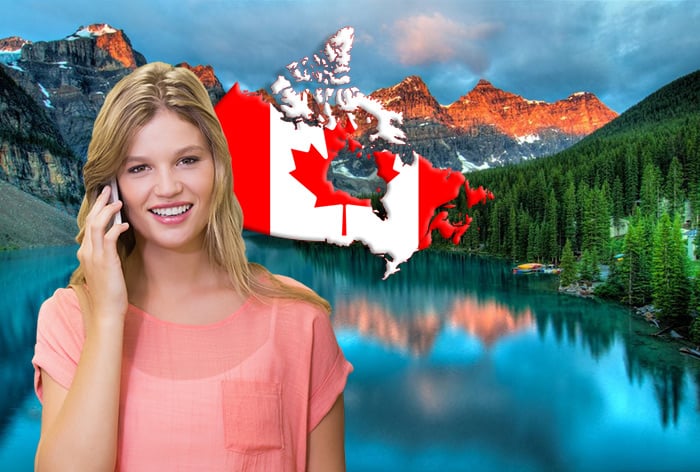 The largest country in North America and the second-largest in the world, Canada is a pristine landscape, with rich culture and history, offering a peaceful existence. Canada is also one of the wealthiest countries in the world and it gets a large number of tourists all year round.

Although the country resembles its neighbor, the United States in a lot of ways, there are also significant differences between the two nations. Like the US, much of Canada has been influenced by immigrants from European nations, most importantly Britain and France.

But unlike the US, this dual nature of Canada is very significant, since some parts of the country, like Quebec and parts of New Brunswick, speak French.

Once under British rule, Canada got dominion status in 1867 by an act of the British parliament, although it wasn’t until 1982 that the country was completely free from British influence. Even though a medium-sized country with a population of only 35 million, Canada has made its own place on the global stage with its remarkable peacekeeping efforts, robust diplomatic skills, and respect for human rights. For a few years in a row, Canada has ranked first in having the best quality of life compared to other nations.

Some of the aspects where Canada scores above the average are in housing, overall well-being, health, personal security, income and social status, environmental quality, education, and work-life balance. Canada is also a member of the Commonwealth of Nations. Ottawa is the capital of Canada, and Toronto, Montréal, and Vancouver are some of the largest and most important cities.

The Canadian culture has been shaped by various European influences, mainly British and French. Influence from the United States is also quite strong (Canada has an MLB team and one NBA team – both in Toronto – the Blue Jays even won the World Series twice in the early 90’s). Canada is known to be a tolerant country, with an open and accepting attitude towards other cultures and religions.

There are two official languages in Canada: English and French. Aside from that, Canadians speak a variety of other languages, as a result of the vast immigrant population. Some of the languages spoken in various parts of the country are German, Italian, Spanish, Chinese, and Punjabi. The indigenous population, although small in number, have their own aboriginal languages.

Canadians are extremely friendly. They love outdoor sports and enjoying the vast wilderness of their beautiful land. Some of their staple foods include maple syrup, Montreal-style smoked meat, poutine, peameal bacon, and butter tart. Canada Day is celebrated on the 1st of July every year. All other major festivals and traditions are also observed in Canada.

The country is known by their maple leaf symbol and for producing the best hockey players in the world. Ice hockey is the most popular sport in Canada, although football, rugby, and skiing are additional favorites. The country is known for its sub-zero temperatures and its movie locations. Some of the popular movies shot in Canada include Capote, Brokeback Mountain, Titanic, and Blades of Glory.

The Canadian economy is favorable for investments, businesses, and job seekers. A center of technological innovation, the country has a very developed e-commerce market. The Canadian political system is one of the most stable in the world. The vast natural and energy resources make Canada a wealthy nation, while strong industrial, manufacturing and service sectors contribute to the thriving economy.

Although natural disasters like blizzards, avalanches, and forest fires frequently take a toll on economic growth, the nation is quick to recover and flourish again. The 2008 financial crash affected Canada to a great extent, but the country is recovering quickly, with unemployment rates dropping and the annual growth steadily rising.

Canada is open to foreign investments, offering plenty of business opportunities to both Canadian and foreign enterprises. The country is known for its easy and straightforward immigration policy, and the same applies to those who want to immigrate to Canada for business purposes.

Much of the Canadian economy is linked to the price of oil, and 2017 has been looking good for the country. Trade is also picking up this year, and the Canadian dollar – which experts feared would drop too low – is also looking up.

On the International Stage

Canada is widely recognized for its peacekeeping role internationally. Over the years, Canada has had a major influence on important historical events, from the creation of the United Nations after World War II to the drive against apartheid in South Africa. Canada has also been an active force in promoting global disarmament and the fight against diseases like malaria and HIV/AIDS.

The Canadian nation is much like many other developed countries, but its peaceful mentality, natural beauty, and high quality of life set it apart from the rest. Whether you want to start a business or a family, Canada is the ideal destination. With advanced transportation, communication, and education systems, Canada offers the perfect environment for people from all over the world.