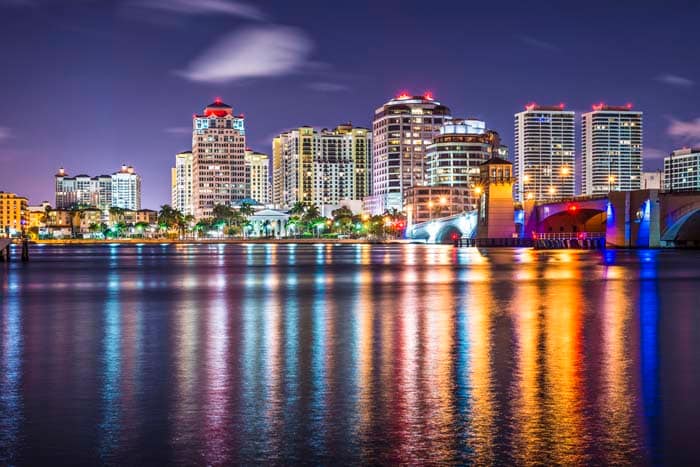 The southeastern coast of Florida is unique from many other regions in the United States. Starting at Key West all the way up to West Palm Beach, there is nothing but urban development. That’s about 230 miles of nothing but city, business, and commerce.

Although people tend to think of South Florida as “Miami” or “Fort Lauderdale,” it’s the city that lies at the very northernmost point of the region’s urban expanse that deserves special mention. The city of West Palm Beach, which is the oldest city in the South Florida area (yes, older than Miami), boasts demographics and an economy that businesses can’t ignore. West Palm Beach virtual phone numbers can give your business access to this urban hub.

You can get different types of West Palm Beach phone numbers for your business. Global Call Forwarding offers:

Benefits of Using a West Palm Beach Number for Business

Why should your business buy a West Palm Beach phone number?

With a West Palm Beach virtual number, you can:

How Much Does a West Palm Beach Virtual Number Cost?

How to Get a West Palm Beach Phone Number?

You can buy a West Palm Beach phone number from Global Call Forwarding in two ways:

Demographics and Culture that are Great for Business

If you’re looking for a young population with lots of disposable income, this is it. The average age for a resident of West Palm Beach is only 40 years old. This is also an educated crowd for anyone with West Palm Beach virtual phone numbers to access — West Palm Beach has five universities within its city limits, and there are fourteen in all of Palm Beach County.

Culturally-based businesses should also take a look at West Palm, which is home to the Kravis Center, one of the largest performing arts theaters in the region that regularly attracts Broadway-quality shows and headlining musical events.

Any business looking to do business with tourists or those on vacation would do great with West Palm Beach virtual phone numbers. West Palm Beach spans inland almost to the everglades, but it also reaches to the furthest point east at the city’s famed beaches. The coastline and moderate coast temperatures attract tourists as well as music and art festivals, including Sunfest, the largest waterfront music festival in South Florida that features nationally known artists.

The Benefits of a Virtual Phone Number

West Palm Beach virtual phone numbers allow you to be part of the community, without having to relocate your business or worry about setting up expensive remote offices in the area.

Additionally, because you can get virtual phone numbers that are local to the area (in West Palm Beach’s case, numbers with a “561” area code), your business has an appeal to the locals, and they can reach you without dialing long distance.

In areas like West Palm Beach, which are metropolitan with adjacent, surrounding cities, a local virtual phone number gives you many benefits for reaching the areas surrounding the city limits as well.

If you’re looking to sell or market to West Palm beach customers, you may want to make your business available after hours, to accommodate West Palm Beach’s young, artistic, youthful population.

Features like voicemail or text messaging to email, fax to email, or simultaneous ring (where a call rings to two designated numbers instead of one) are all available and many are even included in regular monthly plans.

West Palm Beach virtual phone numbers let your business take part in South Florida’s most thriving young populations that have income to spare. It won’t cost you much to reach out to this valuable customer base and begin your new marketing campaign. Just a call to Global Call Forwarding to set up your new, virtual phone number is all it takes to get going!