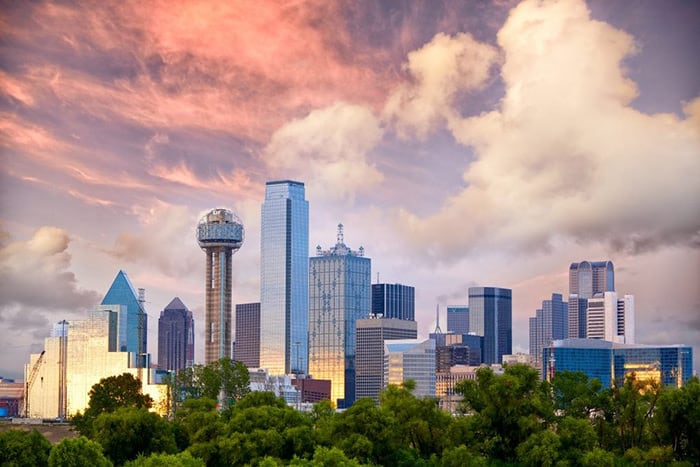 The 972 area code is found in the state of Texas, the second-largest state in the United States of America. The 972 US area code is responsible for the communications of several cities including, Dallas, Texas which observes the central time zone and is located in North Texas. Other counties that the 972 area code – Dallas covers are Collin, Denton, Rockwall, and Ellis. The 972 area code was put into use in 1996 and has been servicing 9 counties of Texas ever since. It was a second-tier area code from the original 214 area code found in most of the 972 Texas counties.

Dallas is a large city with approximately 1.3 million people living in this dynamic and cultural hub of Texas. The population of Dallas has been growing rapidly since 2010 perhaps because of the lucrative finance industries and thriving art scene. Downtown Dallas is comprised of several small gothic structures and huge skyscrapers over 700 ft tall. In Southern Dallas, Fair Park is home to the annual 24-day long Texas State Fair. Fair Park was originally created to be only 80 acres long but eventually was expanded to be 277 acres. Millions of people flock to the State Fair each year to indulge in unique fried foods, BMX bike shows, pig races, and puppet shows.

There are plenty of other reasons to live or work in Dallas. It is now known for having a ritzy population where you will find plenty of residents living in beautiful homes and driving fancy cars; in fact 18 of America’s billionaires call 972 area code – Dallas home. The real estate market is a booming industry with apartment construction and leasing numbers reaching record heights. Dallas was named by Forbes in 2015 as “The Best Place for Business and Careers” in Texas, as it is home to several Fortune 500 companies.

The food in Dallas is amongst the best in the world, and there are more restaurants in the 972 area code – Dallas than in New York City per capita. Aside from the wildly popular Texas barbecue, you can also find delicious Tex-Mex, Italian, Japanese, and seafood options. The robust art scene in Dallas is due to the amazing art venues in the northern Arts District in downtown Dallas. While wandering around this district you will find the Dallas Museum of Art, Morton H. Meyerson Symphony Center, and the Dallas Center for the Performing Arts. If you wander a bit further north you will find the famous Meadows Museum which showcases gorgeous pieces from Picasso, Goya, and several other Spanish artists.

If you’re thinking about expanding your business to the flourishing city of Dallas, the time to strike is now. However if you’re not prepared to open up a brand new office, consider purchasing a virtual phone number with a local 972 Area Code. Having a virtual phone number in another city opens your business up to a wide local market outside of your current surroundings. Because of the high population of Dallas, and because the average income is over $67,000, combined with a low-cost of living there are plenty of people in Dallas to market to. Not to mention, the people are also extremely friendly.

When you choose to use a virtual phone number there are several options that become available to you. If you choose Global Call Forwarding for your virtual phone number then you will be provided several options to choose from. You will receive your virtual 972 Area Code – Dallas number and can immediately start making and taking phone calls from your local Dallas consumers. There are many features that come standard with your service, too.

All of these features give your business the feel of a huge corporation without having to employ a huge staff or spend thousands of dollars on call center equipment. Getting a 972 area code – Dallas virtual number is extremely smart for any international business owner because it will boost your overall presence and credibility in a thriving market.

The 972 area code serves the city of Dallas in North Texas. It also covers the regions of Collin, Denton, Rockwall, and Ellis.

A 972 area code phone number helps you ease your business into the Texas market. You can take advantage of this booming economy by establishing a local presence within the state.

Global Call Forwarding offers a variety of local and international phone numbers, including 972 area code phone numbers. Sign up online or connect with our representatives for assistance!