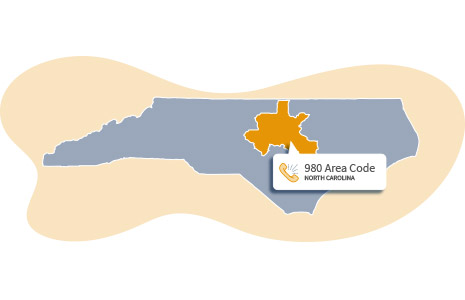 What Time Zone Does Charlotte, N.C., Come Under?

Like other eastern states in the United States, people living in this area code have their clocks set to Eastern Standard Time (EST). This time functions 5 hours behind the Greenwich Mean Time (GMT), and so Charlotte follows GMT–5. However, during the months of March to November, the country switches to Daylight Savings Time (DST). And during this time, the state follows GMT–4. This information is important to keep in mind when doing business with North Carolina and its cities.

Should You Get a 980 Area Code Number For Business?

Companies aiming to reach people living in North Carolina, specifically in Charlotte, need a 980 area code number. Rather than moving and setting up a business physically in the state, you can enter the market with virtual numbers. You can purchase US phone numbers with area codes for locations all over the U.S. And use the internet to make calls and answer calls, which is cheaper than using traditional phone lines. Additionally, you can take advantage of resourceful features that are included, like call forwarding, personalized greetings, fax forwarding, and more.

What Kind of Businesses Exist in North Carolina?

Known as a metropolitan locale, Charlotte is blooming financially as a result of its deep history within the agricultural and banking industries. As such, it’s known for being headquarters to many well-known US banks, including Bank of America and Truist Financial, as well as Wells Fargo’s East Coast operations. Plus, the city is home to other industry headquarters of top brand names like Lowes. With these popular banks and corporations setting up shop in Charlotte, one can certainly benefit from a diverse economy exploding with financial opportunity.

N.C.: A Blend of Everything

Charlotte is one of the country’s fastest-growing metro areas, and is also listed as a “gamma global city” by the Globalization and World Cities Research Network (GaWC). Charlotte sits in the southwest region of North Carolina. This state features picturesque landscapes, defined by the Appalachian Mountains and the Atlantic coastal plain. Historically, in 1729, North Carolina was a royal colony and one of the original Thirteen Colonies ruled by Great Britain. It was also one of the first states to be restored to Union rule post Civil War.

Within the downtown area of Charlotte, one can find both historical sites that include beautiful architecture and a bustling business district filled with skyscrapers and modern office buildings. Some notable establishments include the Charlotte Ballet, the NASCAR Hall of Fame, Carowinds Park, and Blumenthal Performing Arts Center, to name a few. Additionally, this city houses the Carolina Panthers, Charlotte Hornets, and the NASCAR All-Star Race.

Charlotte and the surrounding area of North Carolina offers a blend of history, culture, nature, curiosity, and progress. With this mixture, those who live here benefit from all of these features, making it one of the most enjoyable locations in the US.

A local 980 phone number will help you establish a local presence in Charlotte, North Carolina. Attract customers and business contacts by providing a number that is easy and inexpensive to call.