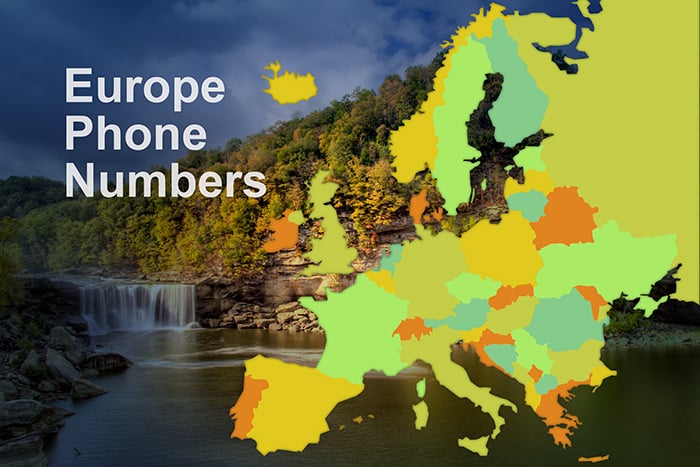 Europe is the third-most populous continent in the world with a July 2018 estimate of 743 million persons according to United Nations estimates. This represents 9.83% of the world’s population. The median age in Europe is 41.8 years, and 74.3% of the residents live in urban areas. Global Call Forwarding sells Europe Phone Numbers in 43 of the 50 European countries. These Europe Phone Numbers facilitate toll-free telephone access to businesses in over 150 countries around the world.

Asia is the only land border of Europe. Water borders include the Arctic Ocean to the north and the Atlantic Ocean to the west. The Mediterranean Sea, the Black Sea, and the Caspian Sea are Europe’s southern borders. The Kuma-Manych Depression lies between the Black Sea and the Caspian Sea. It forms the demarcation in southern Russia between Europe and Asia. The Russian Plain is to the north of this geological depression, and the Northern Caucasus Region lies to the south. In addition to Russia, there are six other transcontinental countries in Europe. They are Armenia, Azerbaijan, Cyprus, Georgia, Kazakhstan, and Turkey.

Toll-Free – In Europe, toll-free numbers usually have “800,” “900,” or “0800” prefixes. Generally, landlines and fax transmissions within each country are the only telephones that can dial toll-free numbers. There is a toll-free (mobile accessible) version in Europe where mobile phones and pay phones can also dial the numbers.

Geographic – Geographic numbers are associated with specific localities, although all European callers can call these numbers using any telephonic device. The geographic number allows businesses to establish virtual offices in selected localities.

Andorra lies within the Pyrenees Mountains between France and Spain. Its population in 2021 was 79,034 persons. With a developed economy (based on tourism, trade, property, and finance) and its free market, per capita income is above the European average. Furthermore, Andorra actively seeks foreign investment.

Iceland is an island in the North Atlantic Ocean. Its 2021 population was 372,520 inhabitants. Tourism, aluminum smelting, and fishing drive the economy. The 2021 GDP was $25.6 billion. Exports were $4.957 billion, and export commodities included agricultural products, aluminum, ferrosilicon, fish, fish products, and medicinal/ medical products. Imports were $6.525 billion, and imported goods were foodstuffs, machinery and equipment, petroleum products, and textiles.

There is much volcanic and geological activity in Iceland. It has an interior plateau with sand and lava fields. The island also features mountains and glaciers. The largest city in Iceland is Reykjavik with a population of around 122,000 persons. Global Call Forwarding offers toll-free (mobile accessible) numbers in Iceland. These Europe phone numbers reach 164,566 fixed telephone lines, 401,613 mobile cellular phones, and 329,967 internet users.

Luxembourg is a small, landlocked country that borders Belgium, Germany, and France. It is one of the six founding countries of the European Union. Luxembourg has a high-income economy with a GDP of $85.51 billion (2021 estimate) and a per capita income of $113,219. It has $18.4 billion in exports including chemicals, glass, machinery and equipment, and rubber and steel products. Imports are $22.4 billion, and imported commodities are chemicals, commercial aircraft, foodstuffs, luxury consumer goods, metals, and minerals.

Europe virtual phone numbers are business telephone numbers that transmit calls through an internet connection. This enables businesses around the world to benefit from high-quality calls and inexpensive international calling.

Europe virtual numbers use international call forwarding to route incoming calls from Europe to any part of the world. This means that your customers can bypass international calling rates when connecting with your business, no matter where you are located.

Yes, you can use your Europe virtual number from any location. All you need is a stable internet connection and a call forwarding service like Global Call Forwarding.