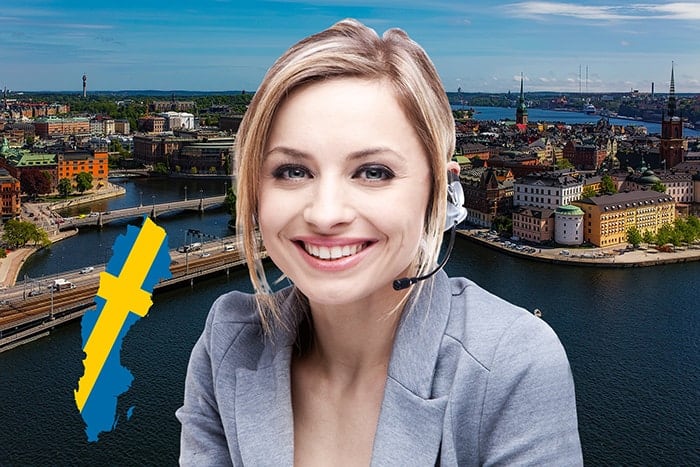 Ready to take your business to Sweden? Global Call Forwarding can get you set up with Sweden phone numbers. Use these numbers to connect with locals, build your local sales network, and grow your business internationally.

The Sweden Phone Numbers are very different for those used in the US and understanding the differences is important for using phones to communicate with companies and people in Sweden.

In the US making phone calls outside your local area requires the use of an area code. For instance if you are in New York and wish to call the number 989-5517 in Chicago, you must preface that number with 1-773 to complete the call. So what you would dial is 1-773-989-5517. The 1 indicates that it’s an out of area call and the 773 is the area code for that part of Chicago you are calling. All area codes in the US are three digits long.

Sweden Phone Numbers also use area codes but they do not all have the same number of digits. They can be 2, 3, or 4 digits long. This includes the leading 0. The larger cities have shorter area codes. For example, Stockholm’s (population about 780,000) area code is 08 while Norrtalje’s (population about 17,300) is 0176.

Sweden is one of the three countries comprising Scandinavia. The other two are Norway and Denmark. Scandinavia, an area in North-Western Europe, owes much of its history, culture, and language to the influence of the northern Germanic region

Sweden is a member of the European Union (EU) but, like some other EU members, it did not adopt the Euro as its currency, retaining instead, the Swedish Krona.

The Swedish economy is an export-based economy and as such, has a highly developed and sophisticated communications system. Therefore, knowledge of the use of Sweden Phone Numbers in the Swedish phone system is important for those foreign companies doing business inside or outside Sweden with Swedish companies.

Sweden is the first country in the world to have its very own telephone number, the Swedish Number. This number is +46 771 793 336. Anyone can call it from anywhere in the world. It will be answered by a Swedish person, who is essentially a representative of Sweden. The person who answers is chosen randomly by the system and not given any special training. The intent is to increase the transparency of Sweden to the world. So, if you want to know anything about Sweden, anything, call +46 771 793 336.

Global Call Forwarding has a variety of business phone numbers from over 160 countries. Companies around the world can use these numbers to connect with global customers and increase international sales. Browse through our inventory and get your Swedish number in less than 2 minutes. Want to learn more? Chat with our experts online!

Sweden phone numbers are virtual numbers for the country of Sweden. Local Swedish customers and contacts can call these numbers and pay local calling rates instead of international rates.

You can get a Sweden phone number with Global Call Forwarding. We offer phone numbers for more than 160 countries around the world, including Sweden virtual numbers, toll free, national, universal toll free, and local numbers.

Having Sweden phone numbers will make it easier for local Swedish customers and business contacts to call you, encouraging them to connect for sales, partnerships, or customer support.