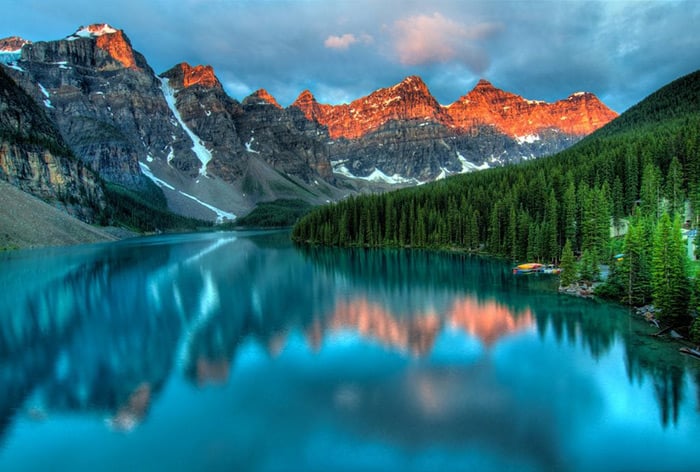 Canada is a country that is located in the northern portion of North America. It is comprised of ten provinces and three territories. It extends from the Atlantic Ocean to the Pacific Ocean and also northward into the Arctic Ocean. The country covers 9.98 million square kilometers (3.85 million square miles). As a result, it is the world’s second-largest country when referring to total area. The area where Canada’s border meets the United States is considered the world’s longest bi-national land border.

The Canadian capital is Ottawa, and the three largest metropolitan areas are Montreal, Vancouver, and Toronto. The nation experiences all four seasons, with climate varying by area. It ranges from frigid temperatures in the north to very warm summers in the southern portions of the nation.

A variety of indigenous people settled in Canada in the years prior to European colonization. In the 16th century, the French and British settled in a number of areas. The first colony to be established by Europeans in this nation was referred to as the colony of Canada. It was established by France in the year 1535. A number of armed conflicts followed, territories were gained and then lost. Closing the 18th century, British North America had taken control of the majority of land that comprises the nation today. On July 1st, 1867, the individual colonies of Canada, New Brunswick, and Nova Scotia were combined. They formed a semi-independent federal region at that tie. This is when the accumulation of provinces and territories to the Dominion began, ultimately resulting in the ten provinces and three territories that make up present-day Canada.

The Canadian nation achieved independence through the establishment of a responsible government during the 1830s, followed by The Constitution Act of 1982. The reigning law of the country is the Constitution of Canada, which consists of both written text and unwritten agreements. It is both a federal parliamentary democracy and a constitutional monarchy. The nation is bilingual (English and French) at the federal level and is considered one of the world’s most ethnically diverse and multicultural countries worldwide.

Canada’s economy is the tenth-largest worldwide, with large reliance placed upon its abundance of natural resources and advanced international trade networks that are firmly in place. The United States, in particular, has had a long-standing relationship with Canada, which has had a considerable influence on its economy. The nation is highly developed and ranks at number 15 with regard to the highest nominal per capita worldwide and at number 10 with regard to the Human Development Index (HDI), which is a multifactorial statistic of education, life expectancy, and per capita income indicators. The nation also ranks high with regard to civil freedoms, quality of life, government transparency, education, and overall quality of life.
The Bank of Canada is the central bank of the nation. The Minister of Finance and the Minister of Industry also use the Statistics Canada agency in order to conduct financial planning and to develop economic policy. The Bank of Canada issues all currency, which is referred to as Canadian banknotes, while the Royal Canadian Mint issues coins.

With regard to foreign relations, the country is known to be a middle power with a tendency to form alliances with multiple countries in the pursuit of common goals. The nation’s peacekeeping position during the 20th century has been a significant factor in establishing the nation’s current global image.

From the beginning of the 20th century, mining, manufacturing, and service sectors have helped to morph the country from an extremely rural economy to a more urbanized and industrial one. The economy is heavily controlled by the service industry, which employs approximately three-quarters of the nation’s workforce. A rarity among developed countries, their primary sector is vastly comprised of the forestry and petroleum industries.

Canada’s offerings are bountiful for residents, visitors, and those looking to conduct business. One of the first steps to take is obtaining a local phone number. This allows you to easily communicate with anyone related to the business in Canada. Global Call Forwarding offers Canada virtual local numbers and toll free numbers with SMS to Email capabilities, call recording, local ringback tones, and many additional features to simplify the transition into this new market.
the transition into this new market.