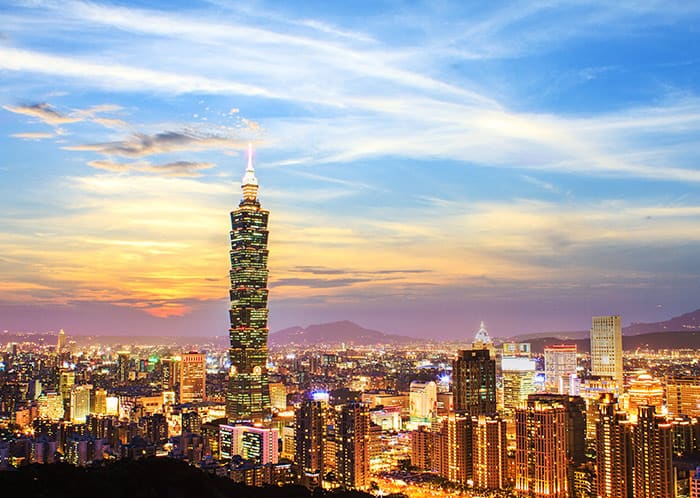 The country of Taiwan is an island nation in east Asia on the South China Sea, comprised of a series of many islands. Green Island, Orchid Island, and Sand Island are just a few of the most popular areas. Taiwan enjoys a very unique landscape, with their Central Mountain Range, or Chungyang Shanmo, as one of their most prominent and well known geographical features. In fact many of the island’s peaks are more than 5,000 – 10,000 feet tall. The tallest is Jade Mountain, or Yu Shan, standing at just under 13,000 feet.

Taiwan’s weather is warmer from May to October and cool from November to March. However, those who live there say it’s always humid year round. Be sure to check the calendar if you want to take a visit to these islands yourself, since the months of August, September and October are typhoon season.

Speaking of visits, tourism is quite popular in Taiwan, with about 10 million visits from foreigners every year. The capital Taipei hosts museums, parks, and spots to enjoy the views. The city is also host to contemporary buildings, local food, and many opportunities to shop. While Taiwanese and Mandarin are the country’s official languages, English is spoken there as well, so if you visit, there will be no need for a personal translator!

For those interested in visiting Taiwan, the nation offers a rich, ecologically diverse environment, with a number of species indigenous to the area, including different species of snakes, birds, squirrels, pangolins, foxes, flying foxes, wild boar, macaques, deer, and the Formosan black bear.

There are mangrove forests on the tidal flats of the coasts, along with evergreen tropical and subtropical forests in the higher elevations, which all contribute to a variety of different landscapes to be found within this unique island nation.

Taiwan is considered to be among the “Four Asian Tigers,” which are considered the top economic nations of Asia. During the second half of the 20th century, Taiwan experienced such intense growth and industrial development, it is known as the “Taiwan Miracle.” The economy is robust and it is a thriving capitalist economy that is export-based. The nation has also experienced rapid growth in GDP over the past three decades, averaging at about 8%.

The island of Taiwan is one of Asia’s biggest international traders. For instance, they are a top producer of electronic and computer technology. Other exports include steel and plastics, automobile parts, machinery, and textiles. Since Taiwan is a modern country with a good quality of life, it may be a smart decision to either begin a new enterprise there, market your current products, or partner with new suppliers. Being about to outsource work inexpensively is another option for business owners and C-level executives who want to utilize a strong workforce inexpensively.

Not only that, Taiwan is a perfect stepping stone to market to China. This is because of Taiwan’s proximity both in geographic location and in business relations. The contacts you acquire in one country will be very helpful for making your company more global. So feel free to expand as much as you’d like!

Unlike many other countries, the government in Taiwan makes it easy to enter into business there. This makes is big draw to international business owners who want to affordably begin Asian expansion from Taiwan. In fact, you can legally own your international company inside the country 100% and have the same rights as a local citizen without any legal issues. So if you are looking for a reason to enter into the market, now might be the perfect time.

Communications and Media in Taiwan

Taiwan’s media environment is both free and competitive, with hundreds of privately owned newspapers, broadcast media, and other media resources. More than 85% of the population is online and about 60% of houses have cable television. Chunghwa Telecom is the largest and most well-known telecommunications company in Taiwan, founded in 1996. Other major operators are Taiwan Mobile and FarEasTone Telecom.

Since Taiwan is a major provider of phone products, they have an advantage over other countries in terms of providing great service. Most locals own smartphones with plans for minutes, texting, and data. If you’re planning on staying for longer than a vacation period, having a cellphone is vital for both business and personal communications. Luckily Taiwan’s providers offer low-cost options for staying in touch with all of your contacts. Before you step foot in the country, try to research some of your best options beforehand to save yourself some time, money, and effort.

Your organization needs a trusted provider who makes internal and external communications seamless. While a thriving country like Taiwan might be out of reach for some, using digital numbers, Taiwan local numbers and Taiwan toll free numbers can help your business expand into every one of Taiwan’s major cities simply and virtually. This can make running your business smarter than ever.