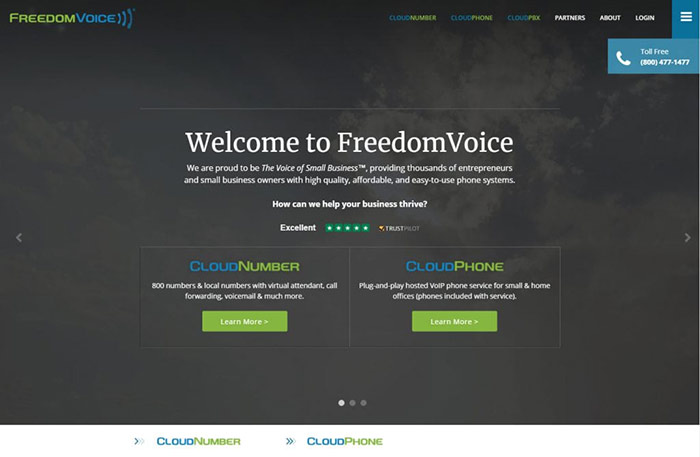 GoDaddy acquired FreedomVoice in 2016. Since May 31, 2017, FreedomVoice operates as a subsidiary of (mt) Media Temple, Inc, which GoDaddy also owns.

FreedomVoice markets itself as “The Voice of Small Business™,” and it specializes in phone service for small business and entrepreneurs.

CloudPhone is a cloud-based phone service. FreedomVoice hosts the service using cloud servers. There is unlimited calling in the US, Canada, Puerto Rico, and the US Virgin Islands. FreedomVoice Polycom uses desk set phones for the service, some are free and others are available at a nominal monthly cost. There is also a mobile app for iPhone or Android phones. The minimum service cost is $29.95 per month, per phone.

CloudPBX is a scalable, cloud-based business phone system offered by FreedomVoice. Since the system is cloud-based, there is no need for expensive PBX hardware. Users manage the system using the FreedomVoice app on their iPhones or Android mobile devices. To minimize user cost, CloudPBX charges one rate for trunk lines and a second, lower rate per user.

FreedomVoice is best for its cloud PBX, which is more flexible than competing systems. However, there is added cost for the customization. If other providers do not meet specific needs, CloudPBX may be a good option.

FreedomVoice offers a full range of features plus some aspects that other systems do not have. They also allow customization and flexibility. However, the added fees for some features and the limited customer service window are drawbacks.

NextAdvisor recently published a review on virtual phone and virtual office systems. The overall results of the review are as follows.

The conclusions of the review were that FreedomVoice is best for 10 employees or less; it includes faxing; it was easy to use, and all plans allowed unlimited mailboxes.

The review mentioned several times that FreedomVoice is for both residential and business users. The ratings were four stars for Overall, Features, Price, and Customer Support.

The positives from the review included the number of available features, the scalability of the service, the straightforward account manager, support for third-party softphone integration, low-cost pricing plans, and a free trial period. The negatives included limited media storage, hidden prices, and expensive number porting.

Trustpilot is an online review community. It has received 630 reviews from the internet. Ratings ranged from one to five stars, one star being “Bad” and five stars being “Excellent.” The ratings for FreedomVoice were: