After the FCC announced 833 numbers, the latest prefix addition to U.S. toll free numbers, Global Call Forwarding received numerous requests from customers. We have provided toll free numbers for many years, and it has become one of our specialties. In this article, we discuss these numbers and answer some of the inquiries we received.

You have probably heard about toll free numbers. Collect calling has been around since the 1960s, and toll free numbers are a great marketing tool because they’re free to call. Rather, the toll free subscriber, or the called party, bears the cost of the call.

A lot of our customers want to learn more about the prefix 833 – their capabilities, functionality and how much they cost. We’re happy to help you with the process and ensure that you have the best options for obtaining the U.S. toll free number you desire.

Like any other toll free number, 833 numbers are a great marketing tool. They are accessible within the United States, Canada and the Caribbean. In fact, 833 numbers are free to call from these countries!

Vanity numbers with the 833 prefix are customized toll free numbers with a specific string of digits that you request. Companies will typically request vanity numbers with their company name, slogan or products/services to better communicate their business. For example, a company that sells dog food might request 1-833-DOG-FOOD. 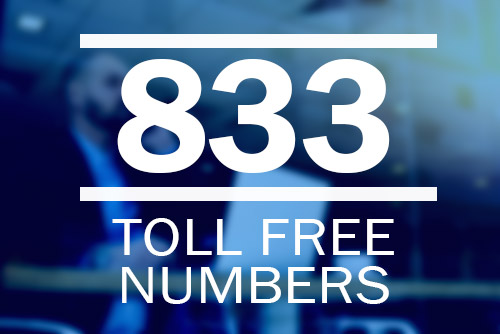 You will be able to get an 833 toll free number starting June 3rd, 2017. Contact a call forwarding service provider to get an 833 number. Providers are already taking requests for these numbers, and the numbers are provided on a first-come, first-serve basis. Here are some things to keep in mind:

How much does it cost?

There are many toll free service providers, and the cost of 833 numbers varies among providers. Most providers offer 833 at a monthly rate. The package will typically include the 833 number, the forwarding service (to route calls to your desired destination) and a set number of minutes to use throughout the month. The provider might charge a per-minute rate if you exceed your set number of minutes.

In addition to the cost of the number, it’s important to look at the reputation of the service provider. Be wary of hidden “activation” charges, and providers that require you to sign a contract. The service should be offered on a month-to-month basis with no termination fees.

833’s are the latest toll free prefix. Call Global Call Forwarding today to reserve your number! We offer free consultations over the phone and would love to help your business grow.